Tribute to solidarity at the ‘III The Global Gift Gala Madrid

Madrid, March 23, 2018. The third edition of The Global Gift Gala Madrid was celebrated in the Thyssen-Bornemisza National Museum in Madrid. María Bravo, chair of the Gala, along with the singer Anastacia and the actress Pamela Anderson, brought together personalities from every corner of the world for an evening in which art, glamor and, above all, solidarity shone, and in which, undoubtedly, the protagonists were children. For María Bravo, founder of the foundation, “Madrid is a city of solidarity. Global Gift is more than a foundation to raise funds and transmit a message of hope. We are a family with the same vision and willingness to help those who need us. Thanks to the unconditional support of our ambassadors such as Anastacia, Pamela Anderson, Father Angel, my dear friend Eva Longoria, Chenoa, Rafael Amargo and many celebrities, we have become a voice and a force that transcends continents. Last year we supported 21 causes, in addition to continuing with our Casa Global Gift project.” Anastacia, who was in the role of honorary chair during the evening, said she was “grateful and excited to be part of this gala and to help the foundation with the great work it carries out in Spain and in the world. The work that Global Gift develops on a daily basis to raise funds to improve the lives of children, women and families at risk of exclusion is admirable and that is why I am happy to be here today.” The help of collaborators and sponsors is essential, so María Bravo wanted to highlight “the support provided by all those people and organizations to make the Global Gift Gala possible. I want to thank the contribution to the Gran Meliá Palacio de los Duques hotel, which is once again the Official Hotel of ‘The Global Gift Gala – Madrid’, to the chef Ramón Freixa, who for the second consecutive year will design and prepare the menu for the night; and the stylist Lorena Morlote who, along with her trusted brands TERMIX and RENÉ FURTERER, has been in charge of the hair and make-up. The brand Habla has donated the wine and Luxury Spain organized all the products for the cocktail. ”

During the III ‘The Global Gift Gala’, which was presented by the actress Norma Ruíz, the Foundation presented the Global Gift awards, awards that defend the social commitment of personalities and entities with disadvantaged groups. The Atlético Madrid Foundation received ‘The Global Gift Humanitarian Award’ for its social work and its commitment to society, developing all kinds of activities for cultural and educational purposes. The Atlético Madrid Foundation works in its day to day to promote and instill the fundamental values ​​of sport in society, as a tool in the education of people, especially children and adolescents, thus contributing to their complete personal, physical and social development.  “It is a real honor and a great satisfaction to receive this wonderful award. Atletico Madrid as a club, as everyone knows, has been committed to all the projects promoted by its Foundation for many years” said Enrique Cerezo, president of the Atlético Madrid club.  The world of football was also represented by the French footballer Adil Rami, former player of Valencia and Sevilla.

With the same award, motivational coach Montse Hidalgo was awarded in recognition of her professional career dedicated to changing the personal and professional lives of hundreds of people through the empowerment of men and women around the world. For Montse Hidalgo “it is a real honor to receive this award that recognizes the work we do at the University of Happiness.” Some of the Global Gifters awarded with this award in other editions of ‘The Global Gift Gala’ have been: David Beckham, Karen Ruimy, Vicente del Bosque, Mariah Carey or Father Angel among others.

The main protagonists of the night were the foundations to which the funds were raised during the Gala: Querer Foundation, Thyssen-Bornemisza National Museum and Global Gift Foundation.María Bravo was enthusiastic and grateful to be able to allocate the funds raised at the gala to Casa Global Gift in Marbella, the star project of the Foundation. The initiative of the Global Gift Foundation that offers specialized support and material adapted to children suffering from chronic and rare diseases, as well as their family environment. “The dream of the Foundation has always been to have its own project in the city where it was born, and we can already say that the House is on the way, thanks to the projection of the architect Patricia Gómez-Toledo, and thanks also to your donations.” The Querer Foundation, which in 2017 was awarded the ‘The Global Gift Our Heroes Award’ for its work to raise awareness of the importance of childhood neurological diseases, was another of the beneficiary foundations. Pilar García de la Granja, founder of the organization, thanked for the support that Global Gift offers to its foundation, with whom they work and share projects. The journalist highlighted the partnership forged between the two foundations through its projects the Cole de Celia and Pepe and the Casa Global Gift, with which they favor education, research, dissemination and therapies related to children with special needs derived from rare and chronic diseases. María Bravo thanked Pilar García de la Granja for her work “creating hope and a future for mothers and children”.  Alongside Pilar García de la Granja, she was joined by Margarita Vargas, Blanca Cuesta and Ana Rosa Quintana. The Thyssen-Bornemisza National Museum, for its part, is going to dedicate its funds to the Nos + Otros project in a network, created in 2015 by the Museum’s education area, Educathyssen, to ensure that women at risk of exclusion can find new ways of integration and self-esteem through a laboratory of artistic co-creation. The project involves professionals and users of various educational resources and associations with the artists and educators of the Thyssen Museum, providing all the experience of EducaThyseen in terms of gender issues.  In its commitment to improve the lives of those women who need it, the Global Gift Foundation has joined forces with the cause. For Evelio Acevedo Carrero, managing director of the Thyssen-Bornemisza National Museum, “it is a pleasure to have been able to collaborate with The Global Gift in its mission to help make aid projects for women and children at risk of exclusion and awareness about them a reality.”

Chef Ramon Freixa and his trust in the causes

For the second year in a row, two-Michelin-star chef Ramón Freixa wanted to contribute his bit to the causes supported by the Global Gift Foundation by preparing the Gala menu. With a marked Spanish accent in its creation and faithful to its essence, Ramón Freixa, once again bet on the best seasonal products. Ramón Freixa commented that he is “very committed to the Global Gift Foundation and it is an honor to share again my gastronomic proposal at the service of this wonderful solidary project that, without a doubt, will help improve the lives of many people and especially children”. A long list of important personalities of the Spanish and international cultures such as Borja Thyssen, Blanca Cuesta, Pamela Anderson, Chenoa, Margarita Vargas, Luis Alfonso de Borbón, Esher Doña and Carlos Falcó, Rosa and Natalia from Operación Triunfo I, Simoneta Gómez Acebo, Esmeralda Moya , Cecilia Gómez, Cristina Castaño, Father Ángel, Raúl Olivo or Fiona Ferrer, supported this third edition of ‘The Global Gift Gala’, which featured performances by artists such as the dancer Rafael Amargo, the illusionist Jorge Blass, the singer Descemer Bueno with the singer Dama, the tenor Angélica de la Riva, who was accompanied during her performance by the National Music Award 2018 winner, pianist, Rosa Torres Pardo. Communication is a key element to spread the solidarity work, and for that reason, for the first time, and it was for this reason the organization invited two very special reporters to be on their red carpet. Laura of twelve years and Gonzalo of eleven were the official reporters for XL Kids, who told everything that happened through the educational station of the Gestiona Group, Que! XLKids, the only radio made by and for children.

Children, the stars of the show

In this magical and emotional evening, care for childhood has once again played a leading role. One of the most special moments of the night came from the hand of Chenoa and little Paula, who read her own story, that of a girl who suffers from cystic fibrosis and that benefits from Casa Global Gift, her second home. During the traditional charity auction, Paula and Chenoa explained to the attendees how she uses vest that makes life easier, helping her to breathe. Together with the singer, they lifted donations to cover the cost of 7 vests for children in a similar situation to Paula. 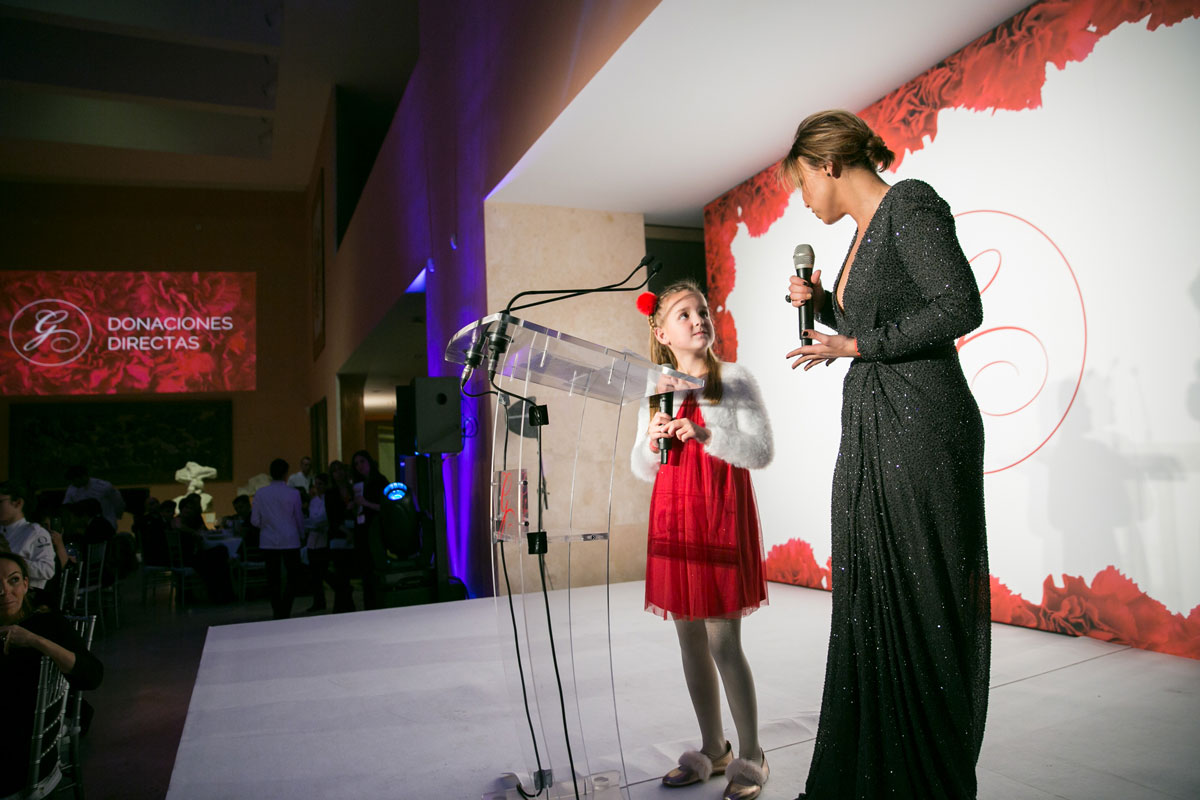 In addition, another of the direct donations that were made during the Gala was intended to finance the construction of a copper-coated room for children with cystic fibrosis. 16,000 euros were obtained to start one of these rooms, of which there are currently only 12 in the world, allowing greater hygiene and health conditions for this type of patients. Likewise, in order to help and improve the mobility of children with chronic neurological diseases, those attending the gala made donations to build two climbing walls in El Cole de Celia and Pepe, the solidary project of the Querer Foundation.