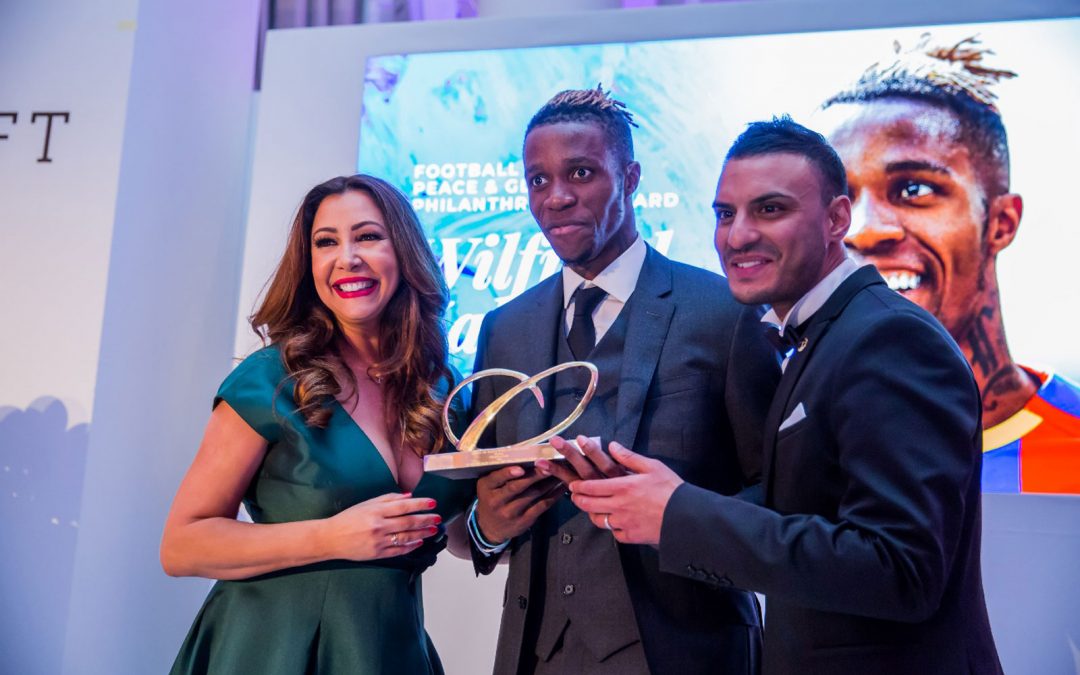 Global Gift Foundation and the ONG Football For Peace Co-Founded by Kash Siddiqi and FIFA legend, Elías Figueroa, joined forces with the support of the United Nations for Sport, Development and Peace.

London, April 9th 2019: Spanish entrepreneur and philanthropist, Maria Bravo, creator of the Global Gift Foundation and its events, celebrated the first edition of “Football for Peace by Global Gift Initiative at the stunning Corinthia Hotel in London, joining forces with the founders of the NGO Football for Peace, Kash Siddiqi and FIFA legend Elias Figueroa. Great personalities attended from music, fashion, cinema & television such as Katie Piper, Jessica Wright or Danny Jones, as well as footballers, Mamadou Sakho, Callum Wilson, Andy Carroll, Carlton Cole, James Tomkins, Oumar Niasse, Adebayo Akinfenwa,  Marlon Harewood among many others, who all gathered to raise funds and make a difference in the lives of children and women around the world.

The auction boasted some incredible experiences where the most successful lot was the bespoke piece of art created over 2 years to celebrate 25 years of premiership football by artist and Global Gift ambassador, Sacha Jafri, which sold for 155,000 pounds. Experiences such as attending the 8th edition of The Global Gift Gala in Marbella or an exclusive concert by Andrea Bocelli that reached 9,000 pounds in the live auction that was hosted by Jonny Gould.

Award winners included Footballer Wilfried Zaha received the “Global Gift Philanthropist Award” for donating 10% of his monthly income to charity.
Football legend, Harry Redknapp, who was unable to attend at the last minute, was honoured with the Global Gift Humanitarian Award, and his friend Jeff Mostyn, president of Bournemouth AFC & Trustee of Football For Peace, picked up the award on his behalf: “I’m delighted to receive this award on behalf of Harry Redknapp, for the magnificent work that both he and his wife Sandra have done over the years.

The founders of both beneficiary organizations on the night said:

Maria Bravo:“At the Global Gift Foundation, we recognize the importance of supporting women and children, as well as the less privileged anywhere in the world. Therefore, it is an honour to work together with an ONG such as Football for Peace. They are an innovator within their industry, promoting messages like ours; messages of unity and diversity at a time when we must all unite. “

Kash Siddiqi, co-founder of Football for Peace:“Football unites people, in the professional game, in the parks, gardens, playgrounds, in zones of conflict, in any place large enough to kick a ball. It brings together people from all backgrounds, religions and countries, creates friendships, bonds and opens dialogue between people. “

“In Football for Peace we believe that women have a fundamental role to play in this field. Behind every great success there is always a strong woman! And tonight, is no exception, María Bravo and I share an incredible vision. Personally, I am grateful for this partnership between Football for Peace and Global Gift Foundation, since our goal is to take this joint initiative to the whole world. We are excited to start this trip together! “

In addition to the Official Sponsor, XPOSE, this 1st edition of “Football for Peace by Global Gift” is sponsored by Corinthia Hotel, Maupy Worldwide, East of Eden and TFC.

About Football for Peace: Football for Peace is a movement that brings people together & creates understanding; empowering more tolerant and resilient communities through football. We do this through diplomatic, government and local community involvement.

We want to tackle division, gang culture, violence, and negative attitudes that exist across our communities and Cities. Some groups/individuals are ready to promote and instigate hatred and others use violent and nonviolent means to further marginalize communities by promoting ideologies contrary to our shared democratic values and ways of life.

As a result, this has severe implications for our young people, especially for our most vulnerable youth who are at risk of being exposed to hate crime, violence, mental health issues and radical ideologies among other things. This is where the Young Peace Leaders programme is crucial in contributing to stronger more resilient communities, by training our young people to become Young Peace Leaders who will have acquired the skills and experience to change their lives.

Created in 2013 by entrepreneur and philanthropist Maria Bravo, the foundation supports projects from different organizations around the world and has recently launched its own, Global Gift House, a multifunctional centre for children with rare or chronic diseases that is located in the city of Marbella.